Two-time British Open Champion Greg Norman will headline a legendary 156-player field at the 70th Senior PGA Championship. Norman is among 25 former Major champions who will compete for the prestigious Alfred S. Bourne Trophy at Canterbury Golf Club in Beachwood, Ohio, May 19-25.

In addition, the field will also include 13 Ryder Cup Captains and 10 World Golf Hall of Fame members.

The 2009 Senior PGA Championship marks the first time many of these golfers will be playing Canterbury’s historic golf course, which will become only the second course in the U.S. to host all five rotating men’s championships. For seven contestants, the Championship is the first time back since the 1979 U.S. Amateur Championship. Most notably, O’Meara and Ohio-native John Cook who faced off in the final match that year. O’Meara eventually edged out Cook to win.

In addition to Cook, four other Ohio golfers will be competing in this year’s Championship. Thomas Herzan of Findlay, Gary Robison and Jim Logue of Canton, and Cory George of Lancaster all qualified for the Championship by finishing in the top 35 at the 2008 Senior PGA Professional National Championship.

For a full listing of the 156-player field, please visit www.pga.com/seniorpga/2009/news/2009fieldlist.html. 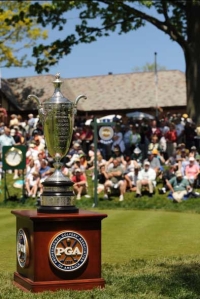 Golf fans visiting the Greater Cleveland Golf Show next weekend (Feb. 19-21) will have the chance to get an up-close look at senior golf’s most coveted prize – The Alfred S. Bourne Trophy, which goes to the winner of the Senior PGA Championship. The Trophy will be on display all weekend located just inside to the Main Entrance of the IX Center.

The Alfred S. Bourne Trophy
In 1937, Alfred S. Bourne, one of the original members of Augusta (Ga.) National Golf Club and a longtime friend of The PGA of America, donated $1,500 for the creation of the Trophy that is awarded each year to the winner of the Senior PGA Championship.

The Bourne Trophy stands 40 inches tall, is 18 inches wide and weighs 30.5 pounds.  It is one of the largest prizes in golf.  Among the legends that have their names engraved on the trophy are: Gene Sarazen, Sam Snead, Arnold Palmer, Chi Chi Rodriguez, Gary Player, Lee Trevino, Jack Nicklaus, Hale Irwin, Tom Watson and Jay Haas.

John Cook
“My mom will hate me, but I like a lot of offense so I can see the Cardinals shocking the world a little bit and winning. It’s such a great underdog story and I like to see that.”

Keith Fergus
“ It ought to be a really great game and the Cardinals have really started playing well, especially those wide receivers and Warner is playing good and they’ve got good running backs. I think they’ll give Pittsburgh all they can handle. I just hope it’s a good game. I don’t really care who wins but I’d like to sit there and watch it. I think Pittsburgh might have a slight edge in the game.”

D.A. Weibring
“It looks like Pittsburgh has the best team, but I’m going to pull for the Arizona Cardinals. I think it’s a nice story.”

Curtis Strange
“I like Pittsburgh. They’re playing well and have a good young coach and have a heckuva team.”

Jeff Sluman
“Have to go with Pittsburgh. I think they’re probably the best defense Arizona’s faced and I think they are a much more powerful team on the offensive and defensive lines.”

Loren Roberts
“The betting money says Pittsburgh is going to win probably by a couple of touchdowns, but for some reason emotionally I’d love to see Arizona win because of Kurt Warner. You know after winning the Super Bowl he kind of got lambasted a little bit as being over the hill, but it’s nice to see him back again. I think Pittsburgh will win but I’m pulling for Arizona.”

Andy Bean
“Pittsburgh is my pick. I just think they have a better defense and that is usually what ends up working in championship games.”

Ben Crenshaw
“I think a lot of people are pulling for Kurt Warner because he’s been through a lot in his career. I’m kind of pulling for the Cardinals and think they might pull it out.”

Tom Watson
“My pick is the Steelers. I always go with the AFC team.”

Allen Doyle
“Your heart maybe wants Arizona, but if you’re betting money, you’ve got to go with Pittsburgh because of that defense.”